Flavay's® action is synergistic for athletes: it protects the body by helping neutralize the naturally occurring pro-oxidative effects of strenuous workouts, and strengthens the body’s collagen, which is a major component of muscles, tendons, cartilage, ligaments and bones. 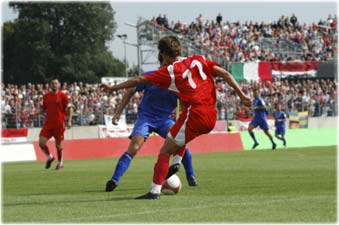 Flavay® has been licensed and sold in France for treating inflammation and edema (swelling) since 1950 and is now available in the United States as a dietary supplement. Research shows several ways that Flavay® can help minimize damage and accelerate recovery time from strenuous workouts and sports-related activities.

Flavay's® action is synergistic for athletes: it protects the body by helping neutralize the naturally occurring pro-oxidative effects of strenuous workouts, and strengthens the body’s collagen, which is a major component of muscles, tendons, cartilage, ligaments and bones.

Flavay's® ability to strengthen and rebuild collagen is important to injury-recovery because most athletic injuries involve damaged capillaries (tiny blood vessels), caused by torn muscles, sprains, fractures or twisting and whiplash. Strengthening of the vascular walls in the capillaries prevents fluids from seeping and swelling in the connective tissues. These types of injuries are painful and usually cause other problems, such as a loss in physical condition when the injury causes an inability to train or compete.

In an Australian study conducted on injured soccer players, those that consumed Flavay® experienced significantly less swelling than those who did not.

Research has shown that Flavay's® ability to strengthen vascular walls may help the body to repair injuries faster. In an Australian study conducted on two groups of soccer players that had sustained injuries, those that consumed Flavay® for ten days following their injuries experienced significantly less swelling than those who did not and, in some of those taking Flavay®, the swelling had completely disappeared. Other research has demonstrated the ways in which Flavay® may actually inhibit inflammation including double-blind studies conducted in France which showed that Flavay® can also reduce postoperative inflammation.

Flavay® is a Natural, Non-Drug Anti-Inflammatory

Inflammation is caused by the overproduction of free radicals in a specific area of the body. We now know that antioxidants work together to defeat free radicals and inhibit the biological pathway that triggers inflammation, and Flavay® is particularly effective as an anti-inflammatory.

Flavay® can selectively bind to the connective tissue of joints, preventing inflammation and lessening pain. One of the very first benefits observed and studied Dr. Jack Masquelier, in as early as 1947, was the anti-inflammatory effect of Flavay®.

Research demonstrates that Flavay® inhibits the release and synthesis of histamine (which produces accelerated blood flow, dilates capillaries and increases their permeability, thereby leaking plasma into surrounding tissue), a key factor in the promotion of inflammation.

Edema is an uncomfortable condition and can be both painful and dangerous. Swollen and painful legs and ankles, puffiness of the eyes and an overall bloated look and feel are examples of edema. It involves the leakage of blood serum into surrounding tissues and Flavay® has shown that it can reduce this leakage by strengthening capillary walls.

All of those taking Flavay® for edema (swelling) had relief from at least some of the symptoms.

Italian scientists from the University of Florence studied the effect of Flavay® on venous congestion (edema) in the legs. The study involved 40 subjects consisting of 13 men and 27 women between the ages of 34 and 74. The subjects were randomly divided into two groups. One group received a placebo and the other group received 300 mg of Flavay® daily for 60 days.

"[A] method for preventing and fighting the harmful biological effects of free radicals in the organism of warm blooded animals and more especially human beings, namely cerebral involution, hypoxia following atherosclerosis, cardiac or cerebral infarction, tumour promotion, inflammation, ischaemia, alterations of the synovial liquid, collagen degradation, among others. The method consists in administering to said animals and especially to human beings an amount, efficient against said effects, of a plant extract with a proanthocyanidins content which has a radical scavenger effect"—Dr. Jack Masquelier, 1987.

This means that your immune system works better so that your joints hurt less and your blood flows better—all because of Flavay®.

Sports and Exercise Increase the Body's Need
for Antioxidants

Exercise is extremely beneficial, but many do not realize that exercise increases the body's need for antioxidants. The fuel our bodies require for sports and exercise is oxygen. Yet the body's production of energy from oxygen can also wreak havoc in the body because it produces free radicals. If we are deficient in antioxidants, the benefits of exercise are diminished by the damage caused by free radicals. Thus, the key to good health, is to maintain the right balance between antioxidants and free radicals. It's not surprising, therefore, that studies have suggested that antioxidants like Flavay® can actually improve athletic performance and endurance.

Flavay® is rapidly absorbed and very quickly distributed throughout the body. As a free radical fighter, Flavay® comes to the aid of the body more quickly than other antioxidants, reducing the potential for free radical damage and the ravages of aging. Flavay® also possesses more reactive sites for neutralizing free radicals than other known antioxidants. Furthermore, Flavay® permits reactivity with both positively and negatively charged free radical species. What this means is that Flavay® can “quench” or “scavenge” (neutralize) a broad variety of free radicals. Highly reactive as an antioxidant in both lipid (fat) and aqueous (water) phases, Flavay® neutralizes oxygen free radicals and is a valuable protector of healthy cells in a variety of internal conditions. This is a unique property among antioxidants, as most work either in lipid or aqueous phases, but not both. As a free radical scavenger, Flavay® is like an antioxidant prize fighter that can successfully take on all challengers, big or small, in any kind of weather

All of this means that your immune system works better so that your joints hurt less and your blood flows better—with Flavay®.

Flavay Plus® Adds Synergistic Help
for Lowering Cortisol in Athletes

Double-blind placebo-controlled research shows that Flavay Plus® can lower stress hormone (cortisol) production by 30 percent when given to athletes prior to starting exercise.
Our Customers Say: “I know taking vitamins is good for you but this is much more than that. Because of taking Flavay® and Flavay Plus® I experience substantial improvement in mental sharpness, acuity and in the ability to react quickly and stay on top of situations while auto racing.”
—dentist

Flavay Plus® is of special interest to athletes as phosphatidyl serine (Leci-PS™), a complex of amino and fatty acids extracted from soy lecithin, has become popular for building and rebuilding muscle more efficiently. Research shows that phosphatidyl serine slows the release of cortisol following heavy exercise. Cortisol is a hormone that causes muscle tissue to break down. For reasons that are unclear, the body produces increase levels of cortisol after heavy exercise. Strength athletes believe that this natural cortisol release works against their efforts to rapidly build muscle mass so Flavay Plus® may help them advance more quickly.

Flavay Plus® is an extremely powerful formula for athletes, especially body builders who specifically require faster muscle building and repair. Flavay Plus® provides a healthy edge—completely safe for all drug testing.