A: Flavay® is the original, highly specialized, nutritional complex of pairs and triples of a specific molecule called "flavan-3-ol," isolated from natural extracts, and that has been extensively tested and examined clinically for biological antioxidant protection, collagen strengthening, tissue rebuilding and other health producing outcomes. (MORE...)

Q:Can the active ingredients in Flavay® be obtained in food?

A:Yes and No. The active flavan-3-ol molecules in Flavay® can be found especially in the fibrous and woody parts of naturally-ripened raw fruits and vegetables and in the skins of seeds, nuts and fruits. Unfortunately, our fruits and vegetables are typically deficient of these active polyphenol molecules due to our modern methods of distributing food—which result in fruits and vegetables that have been harvested while unripe. Another cause for deficiency is cooking, which destroys the active polyphenols. What's more, the skins of seeds, nuts and fruits are the parts of our food that we generally discard or spit out.

Journal of the Science of Food and Agriculture (2000) reports there are no flavanols in commercially prepared juices. The processing and storage of the concentrated juices at room temperature destroys the flavanol molecules completely.

Actually, the best "food" source is red wine. The active principles in Flavay® are at the center of the curious phenomenon known as the "French Paradox." Red wine is a carrier of these healthy polyphenols. So, why not just drink red wine to get your daily dose of flavan-3-ol? Alcoholic beverages are not ideal as dietary supplements due to potential abuse, dependency and toxicity as a result of over consumption. And, while alcohol can compromise liver function, Flavay® actually helps protect hepatic capillaries (the smallest blood vessels in the liver) from free radical damage and activates liver antioxidant enzyme systems. The point is that Flavay® provides specific protection to the liver, and red wine does not.

So, while drinking some red wine is a reasonably healthy for most adults, the best way to guarantee a consistent daily intake of flavan-3-ol polyphenols is in its pure concentrated form: Flavay®.

See also: Why can't we rely on our diet?

A: After 70 years of human use, no adverse effects have been observed. Furthermore, intensive biological, toxicological, pharmacological and analytical research was conducted for the purpose of registration as a medicine in France and other countries in Europe. In one study, daily doses of up to 35,000 mg for six months were determined to cause no adverse effects.

Q:How does Flavay® affect the liver?

A: Flavay® helps protect hepatic capillaries (the smallest blood vessels in the liver) from free radical damage and activates liver antioxidant enzyme systems. A study of twenty patients with cirrhosis of the liver showed that a daily intake of 300 mg of Flavay® can help to decrease capillary fragility of the liver.

See also: Flavay® and the liver and kidneys

Q:Does Flavay® have any contraindications?

A:Flavay® has no known contraindications (conditions under which it should not be used). Flavay® is completely safe and nontoxic. In fact, clinical trials have been conducted in which pregnant women (troubled by varicose veins and other circulatory problems in the legs) safely used Flavay®. (MORE...)

See also: Flavay® and the liver and kidneys

A: Yes, please consult your doctor before starting any course of supplementation or diet change, particularly if you are currently under medical care. If you have or suspect you may have a health problem, you should consult your doctor.

Flavay® is the product—used in the actual experiments—by which Dr. Jack Masquelier patented the "radical scavenger effect".

There are more patents, most are French.

Now consumers need to know that the marketplace is full of imitations, various “extracts” and derivative forms of Dr. Masquelier’s scientifically proven and pefected complex. Unfortunately, many have used Dr. Masquelier’s name and research in unauthorized ways to promote a myriad of derivations. In fact, the other "leading brand" pine bark extract, compared to Flavay® below, is an offshoot derived from Dr. Masquelier's authentic work and products. But, independent comparative testing demonstrates that the initial qualifying research conducted on the authentic products may not be automatically transferred to other commercial products. (MORE...)

A: Yes, Flavay® is backed by 60 years of research and human use and extensive testing for safety. The original French and European brands were registered in France as over-the-counter medications and it has therefore been consumed in Europe under medical supervision for decades with no reports of adverse side effects. (MORE...)

Top
The following terms are used interchangeably for commercial interests—or by mistake—and their differences have truly lost all scientific meaning in the marketplace:
bioflavonoids, flavonoids,
oligomeric proanthocyanidins (OPCs or PCOs), and
polyphenols.

Q:"What is the difference between the terms, OPC and polyphenol? In some cases it appears synonymous and in others there appears to be a distinction. On some labels it will say OPC, but in the supplement facts, it says grape seed extract (vitis vinifera) 95% polyphenols. I am confused."

A:It is confusing! and this is because these terms are used inaccurately in the marketplace. "95% polyphenols" is a meaningless expression in a scientific context. However, it does illustrate a problem: In most cases, the following terms are used interchangeably for commercial interests—or by mistake—and their differences have truly lost all scientific meaning in the marketplace.

Therefore, when reading product labels, magazine articles and many popular books, these scientific terms should be considered as generic words and not scientific whatsoever. (MORE...)

A:Yes (in the marketplace) and No (in the scientific context).

Because of commercial interests—or by mistake— the terms, OPCs and proanthocyanidins, have truly lost all of their scientific meaning in the marketplace. In most cases, suppliers and retailers confuse grape seed extracts as being synonymous with opcs or proanthocyanidins. (MORE...)

However, the terms are not the same in the scientific context. "Grape seed extract" is a nonscientific term that has no specific meaning—other than crushed seeds which can be toxic and oxidizing if not properly manufactured. However, OPCs (short for oligomeric proanthocyanidins) is the active ingredient that was discovered by Dr. Masquelier and proven to have powerful antioxidant properties and other health producing benefits.

It's important to note that independent testing found no active OPCs in a leading American brand of grape seed extract—even though it's aggressively marketed as a branded OPC product. (MORE...) 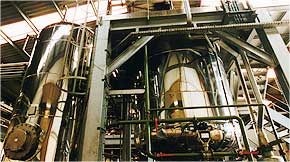 "Grape seed extract" is a vague, nonspecific term that really has no scientific value. In fact, crude "grape seed extract" (and "pine bark extract") imitations are virtually worthless to the consumer without active and naturally-derived oligomeric proanthocyanidins with antioxidant capacity. Some of these extract products contain nothing more than grape seeds or other plant parts which have been pulverized in a food processor. (MORE...)

Flavay®, on the other hand, is a very specific molecular complex which is scientifically defined and manufactured according to the original process developed and patented by Dr. Jack Masquelier in France, approved as an over-the-counter medicine in France and manufactured under the control of French Pharmaceutical inspection.

Q:Is Flavay® the same as OPCs (oligomeric proanthocyanidins) in the marketplace?

OPCs (short for oligomeric proanthocyanidins) is a term that covers many different and complex molecules. However, due to commercial interests—or by mistake—the terms "OPCs" and "proanthocyanidins" are often abused and misunderstood and have therefore lost all of their scientific meaning in the marketplace. (MORE...)

Independent testing found no active OPCs in a leading American brand of "grape seed extract"—even though it's aggressively marketed and branded as an OPC product. (MORE...)

It's true that "OPCs" is the group of active principles that is responsible for bringing the "grape seed extract" category of products to fame. However, independent testing found no active OPCs in a leading American brand of grape seed extract, even though it's labeled and aggressively marketed as a branded OPC product. (MORE...)

Consumers should also be aware that some manufacturers of grape seed and pine bark extracts have devised ways to artificially boost the proanthocyanidin numbers for their extracts in a test tube (in vitro, which is outside the living body and in an artificial environment ). However, there is no scientific research to show whether the human body benefits from this artificial boost.

Flavay® is unique. Flavay® is derived from the original manufacturing process developed and perfected by Dr. Jack Masquelier in France, which captures the naturally-derived oligomeric proanthocyanidins from their plant sources. For 60 years, each batch has been routinely and extensively tested and analyzed to guarantee consistency, potency and purity.

Q: Do you have additional questions about Flavay®?