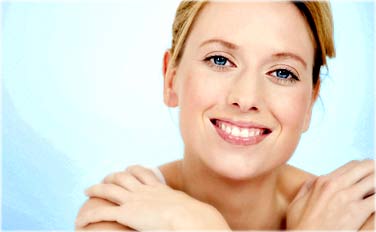 Healthier, Smoother Skin from Within

Flavay® binds to collagen fibers in your skin and realigns it to a more youthful, undamaged form.

Flavay® can have a dramatic, visible effect on your skin. The nutrients in Flavay® can be considered as 'collagen vitamins' because they partake in the biosynthesis of collagen and prevent its destruction. Through synergistic action with vitamin C, Flavay® strengthens and rebuilds the body’s natural collagen proteins and has the remarkable ability to reactivate damaged collagen and elastin. Research has demonstrated that Flavay® binds to collagen fibers and realigns them to a more youthful, undamaged form. (The same research also established that common bioflavonoids are completely inactive in this respect.) Flavay® improves the beneficial cross-linking between the amino acids of the fibers that give skin its flexibility and strength while preventing the undesirable cross-linking between amino acids that ages skin like leather. Laboratory tests have demonstrated Flavay's® ability to reduce degradation of elastin fibers by up to 70 percent.

Flavay® enhances elasticity of your skin and offsets visible signs of premature aging by strengthening and rebuilding your body’s collagen proteins.

Flavay's® ability to reactivate damaged collagen and elastin has great implications for all of your body’s organs. Collagen is required for the normal functioning of the joints, healthy cartilage and bones, smooth gliding surfaces, synovial fluid, normal joint spaces and normal soft tissues surrounding the joints. Collagen is the building block of connective tissue, veins, arteries, ligaments and tendons, and every tissue and organ.

Our Customers Say: “Flavay® really does great things for my skin. It even makes acne scars go away! I'm not a doctor so I can't say what happened, but about 6-8 weeks into taking Flavay®, my acne scars lightened so that you don't notice them. My mother-in-law recently told me I look 15 years younger!”
—Mr. R. E.

Improved circulation is another reason that Flavay® is an important part of optimally nourishing your skin. Over 50 years of scientific and clinical research establishes that Flavay® actually strengthens collagen in vascular walls and capillaries (the smallest vessels), by making the vessels stronger and more elastic. As we age, the tiny capillaries begin to break down, resulting in diminished blood flow. Fortifying these tiny blood vessels will improve circulation throughout the body, including the skin, delivering blood and nutrients to your skin. Improved circulation results in well-nourished, healthy skin—which is radiant and more youthful.

Our Customers Say: “I work on my feet all day, lifting heavy loads, and I developed severe edema so that I could hardly walk. Neither my doctor nor my chiropractor have been able to do anything to help. I was almost ready to go on disability, and I was growing paranoid over it because I am 63 and need to work for two more years to retirement. One painful night in desperation I got online and searched for relief from edema. I found Flavay® and ordered some. I have now taken 3 capsules a day for about a month and there is no more edema. I got reborn! I gave a brochure to my doctor. I wish more people knew about this.”
—Mr. D. P.

Flavay® has been licensed and sold in France for treating edema and inflammations since 1950. Puffiness of the eyes and an overall bloated look and feel are examples of edema. It involves the leakage of blood serum into surrounding tissues and Flavay® has shown that it can reduce this leakage by strengthening capillary walls.

One of the very first benefits observed and studied by the inventor of Flavay®, Dr. Jack Masquelier, in as early as 1947, was its anti-inflammatory effect. His and others' research demonstrated that Flavay® inhibits the release and synthesis of histamine (which produces accelerated blood flow, dilates capillaries and increases their permeability, thereby leaking plasma into surrounding tissue), a key factor in the promotion of inflammation. Numerous studies have demonstrated that the anti-histamine action of Flavay® is obtained through inhibiting the activity of the enzyme histidine decarboxylase. Research shows that Flavay® may lower the production of histamine with as much as 86% inhibition of histidine decarboxylase. Inflammatory reactions are not limited to edema and other problems typically associated to vascular diseases; the factors that cause inflammation can also cause conditions like allergies, bronchitis, and arthritis.

A strong immune system is the cornerstone of good health—if the immune system is weak, it will eventually affect the other systems of the body. Flavay® can boost your immune system in several important ways. First, by increasing the activity of vitamin C, another important immune booster, Flavay® gives the immune system more ammunition to fight infection. Second, research demonstrates that Flavay® prevents free radical damage to macrophages, a type of white blood cell that generates nitric oxide to destroy bacteria, viruses, and host parasites.

Flavay's® antioxidant protection of brain cells is significant as recent studies have established a connection between free radical damage and cognitive impairment. Research demonstrates that Flavay® helps regulate nitric oxide: a colorless gas produced by many different cells in the body: from endothelial cells on the walls of the arteries to the neurons in the brain to the disease-fighting cells of the immune system. Nitric oxide modulates communication between brain cells and is thereby deeply involved in concentration, learning and memory. And, by controlling the muscular tone of blood vessels, nitric oxide regulates circulation and normalizes blood flow. As long as nitric oxide is produced in the right amount, it is beneficial to the body. Overproduction of nitric oxide, however, promotes production of more free radicals in the brain, which can hamper mental function and cause memory loss and brain aging. Thus, Flavay's® ability to help maintain the optimal level of nitric oxide profoundly influences brain (and immune) functions.

There is also evidence that Flavay® may help the body to regulate enzymes which control the crucial neurotransmitters dopamine and norepinephrine, chemicals that carry messages among brain cells and are involved in excitatory responses. Flavay's® ability to support healthy blood flow to the brain is also important to brain function. Researchers have shown that decreased blood flow to the brain plays a major role in age-related brain disorders. Flavay® may also help deliver other nutrients to the brain, such as zinc and selenium, which are essential to normal brain function, according to recent research. Preliminary studies have confirmed what many users of this remarkable complex have experienced: striking benefits in improved concentration and mental focus.

Flavay Plus® has been shown to raise cognitive performance to levels typical for as much as 12 years younger.

Current research demonstrates that antioxidants work synergistically with one another in the body. Flavay Plus® utilizes this dynamic with a synergistic blend of Flavay® and antioxidant vitamins and minerals and phytonutrients; formulated to boost the brain and immune functions—thereby benefiting the whole body.

Published, double-blind research shows that phosphatidyl serine can also be helpful for depression. Phosphatidyl serine is a phospholipid that is vital to brain cell structure and function. Phospholipids are molecules containing both amino and fatty acid components, which are found in every cell membrane in our bodies. Phosphatidyl serine plays an important role in our neurotransmitter systems, in metabolism levels of the brain, and in maintaining nerve connections in the brain. It appears to help reestablish the normal down-regulation of cortisol secretion that is increased in chronically stressed individuals, and its benefit in dementia and depression may relate to improved brain cell membrane fluidity. In the clinical studies, phosphatidyl serine (100 mg three times daily) has been shown to improve the mood and mental function in those with Parkinson’s disease.

Scientific studies have demonstrated that phosphatidyl serine supplementation can increase the output of acetylcholine, the neurotransmitter so important to memory. Clinical trials with elderly patients suffering from memory deficit disorders have shown that adding phosphatidyl serine to the daily diet improved the ability of these patients to think and decreased behavioral disturbances. In other studies, phosphatidyl serine also improved the performance of patients with age-associated memory impairment, a disorder affecting millions of Americans each year.

Flavay Plus® utilizes the dynamic interplay between these nutrients and their co-factors in order to provide you and your family with the best that nutritional science has to offer in a convenient, cost effective capsule.

Get the results you want now: Flavay® rebuilds collagen, improves circulation and health in skin cells, and reduces inflammation; boosts the immune system with powerful antioxidant action; and Flavay Plus® can help improve concentration, attention and memory—raising cognitive performance to the levels typical for as much as 12 years younger!