Novel forms of therapy should not be rejected just because they are novel, or because they run counter to some generally accepted belief (which may just be a bias), or because we do not understand the mechanism of the proposed treatment, or because it has come from an unconventional source. It is essential, if progress is to be made... that the people involved ... strive to open their minds to new ideas. (5)

According to a Harvard study, one third of all Americans have tried Alternative Medicine, and use it on a regular basis. A study which surveyed American women, published in SELF magazine indicates that 83% of them have used some form of Alternative Medicine and 75% of them were satisfied with the results, (this equals 90% satisfaction rate). (8)

Doctors and patients alike are turning to unorthodox treatments. The trend is easily measurable in dollars and cents. A third of adult Americans, most of whom consult medical doctors as well, spend an estimated $13.7 Billion a year out of their pockets. The alternative movement has progressed from offbeat practitioners and adventurous patients to the medical establishment itself, as well as a growing number of health insurers...Illustrious medical schools, no friends of untested practice, have joined lesser-known schools and research groups in taking a new look at what some prefer to call complementary medicine. Harvard Medical School, a bastion of high-end biomedical research, offers a course on how alternative treatments might affect practice and research. (2) 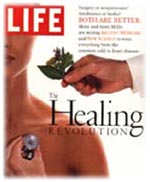 As conventional Western medicine becomes better at what it can do well, its limitations become more conspicuous. (3)

More and more medical doctors are mixing Ancient Medicine and New Science to treat everything from the common cold to heart disease. "By uniting philosophies that have been separate for a long time," says Dr. Weil of the integrative medicine movement, "health care will be completely transformed."

Practices once thought to be the province of snake-oil salesmen are turning up in bastions of medical orthodoxy. Thirty-four of this country's 125 medical schools, including Harvard, Yale and Johns Hopkins, now offer courses in alternative medicine. Even the American Medical Association, which two decades ago declared it "unethical" for its members to associate with chiropractors, grudgingly passed a resolution last year suggesting that its 300,000 members "become more informed regarding the practices and techniques of alternative or unconventional medicine."

"Science is a remarkable thing," says Mehmet Oz, sitting in an office plastered with awards, diplomas and a plaque attesting that he has received Patent 5,370,989 for his "solution for prolonged organ preservation". "We cured most infectious diseases, we made incredible advances. My career is built on a scientific bias. But I also recognize that there are areas where science does not have all the answers." (3)

Why have alternative therapies in this country started to migrate from the margins to the center? One reason is that as allopathic medicine, a term commonly used to describe Western techniques, becomes better at what it can do well, its limitations become more conspicuous. Allopathy is clearly superb at dealing with trauma and bacterial infections. It is far less successful at dealing with asthma, chronic pain and autoimmune diseases. Patients are also growing weary of their hasty processing by conventional doctors. According to one study, the average doctor interrupts his patient after 14 seconds. 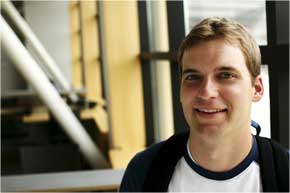 Placebo controlled and double-blind trials prove that young university students experience significantly less stress from tests, stay more clear-headed and composed, and keep a more stable mood when taking Flavay Plus®. (11,12)
Our Customers Say: “My psychologist husband has told me that the difference in my behavior and focus is huge since taking Flavay® and Flavay Plus®. I am definitely ADD, but was never diagnosed as a child. He is amazed at the changes in me, as am I.”
—Ms. Danielle S.

Into this turmoil of mind and emotion, comes a haughty, owl-eyed physician, looking over his spectacles with a superior stare, telling me he does not want me trying any unproven therapies, but that he expects me to just wait until a proven therapy to his liking is found. 'To his liking!' 'Like ___ I'll wait!' 'I want help right now' Usually the things that we patients hear about have helped some patients somewhere. It is just simply not true that no one ever gets better.

WHY QUIBBLE WITH WORDS? I don't really care what you call it; remission, cure, or control. If my symptoms get less severe and don't return, that is all I really care about. most of the unproved therapies will not do me any actual harm, and the rationale for trying them is so simple: If it helped Joe Blow, why not me? So what, if the thing I am doing is not a proven therapy, and won't help every patient? Maybe it will help me, and 'me' is the one I'm really interested in!

So we patients, in our frustration, are going to try some of those unproven "cures" behind the doctors' backs anyway... I believe that doctors ... should look at every hope their patient has, and if that hope does not involve anything that will outright harm the patient, then work with him instead of denying or ridiculing him.

As it turned out, I was perfectly safe in what I was doing all along, so it didn't matter that most of the time I had no regular testing schedule. But, because I had no physician to record, in a scientific way, my progress with the program I used for myself, there is now no body of scientific record for other patients to follow... To me, that is the real shame of not having a doctor with the courage to work with me during all these years. (1)

Drugs produce effects rapidly and, since they are interruptive in action, eventually produce toxic effects (or lose their efficacy as tissues learn to metabolize them differently). Nutrients and herbs are enabling agents for the healing response, but exert their effects in a slow and sustained fashion. Those familiar with both the prevailing drug therapies and nondrug therapies yield long-term clinical outcomes that are far superior to those obtained with drugs. (4)

But novel forms of therapy should not be rejected just because they are novel, or because they run counter to some generally accepted belief (which may just be a bias), or because we do not understand the mechanism of the proposed treatment, or because it has come from an unconventional source. It is essential, if progress is to be made in the attack of cancer, that the people involved, and especially those in the National Cancer Institute and the American Cancer Society, strive to open their minds to new ideas. (5)

The prevention and treatment of many common degenerative diseases often needs no more than vigorous life style changes, some easy-to-follow dietary guidelines, and the appropriate use of nutritional supplements. Too much of modern medicine gravitates to the dramatic, the technological, the expensive, and the dangerous -- and does not really promote health. (6)

Harvey was denounced for claiming that the blood circulates through the body instead of standing still, as was believed at the time. Galileo was persecuted for saying the earth went around the sun, and "learned" men refused even to look through his telescope. Pasteur was branded a quack by his professional colleagues for advancing the germ theory of disease - the theory for which most scientists would be willing to go to the stake today. Jenner was threatened by the police for pioneering vaccination - and by the very medical bodies who swear by it now. Many of the truths put forward by the nutritional scientists and researchers years ago are gradually being ccepted by medical science, which at first laughed them to scorn.

Is your mind open to valid research? Or is it closed and shuttered by mental laziness or the emotional congestion that we call prejudice? None of us knows how many fine things we have missed through being self-satisfied and cocksure. I do not think anyone can be considered really intelligent who does not have a sense of balance and proportion, some sense of the value of evidence, and a readiness to examine new ideas with an open mind. The history of scientific discovery shows that almost every new step was opposed by the very people who should have welcomed it. (9)

The Price of Poor Nutrition

Our Customers Say: “I have become so free of arthritic pain that I’ve taken up playing the guitar! I’ve played a lot today, maybe 4 hours, and as I put away the guitar tonight it occurred to me that without Flavay® I would never be able to do what I've done today .”
—Ms. C. S.

Initially, the body hints of a nutrient shortfall with any of a hodge-podge of minor symptoms: fatigue, weakness, insomnia, irritability, nervousness, depression, poor concentration, memory loss, aches and pains, recurrent infections, allergies, circulatory problems, and just not feeling good. These are the vague symptoms that drive patients to doctors, and drive doctors up a diagnostic tree. Because most conventionally trained physicians have little education or experience in nutrition, they're unable to make the connection between a patient's complaints and a nutrient deficiency Then when the test results come back normal (as they usually do in such cases), the symptoms tend to be dismissed as "all in your head" or, even worse, as "a natural part of aging".

If doctors do prescribe treatment, they usually bypass nutritional supplements in favor of drugs such as anti-inflammatories, antidepressants, tranquilizers, and the like. These not only mask symptoms but also deplete nutrient stores even further. This accelerates the degenerative process, which is the forerunner of disease and aging.

Chronic nutrient deficiencies invariably lead to serious health problems. Data collected from large populations show that as the availability of nutrients declines, the frequency of illness increases. Unfortunately, when heart disease, cancer, diabetes, osteoporosis, arthritis, or some other serious deficiency-driven condition develops, neither doctor nor patient is likely to realize that the symptoms had begun years before. (9)

Ultimately, nutrient deficiencies deprive us of years of life. The average American survives only into his seventies or, if he's lucky, his eighties. Yes, there's always someone who beats these odds and lives to a ripe old age-a 101-year-old Aunt Edna or Uncle Frank who eats nothing but junk food, swigs coffee all morning and downs a shot of whiskey before bed, smokes two packs of cigarettes a day, and has never swallowed a single multivitamin. The fact that such folks live as long as they do is truly remarkable. Unfortunately, they give the rest of us an opportunity to rationalize our own eating habits and lifestyles.

Very few individuals are so genetically well-endowed that they need only stay out of harm's way to survive to age 90 or beyond. For every one of them, there are thousands of the rest of us. And if they took better care of themselves, they could last even longer. Why, Aunt Edna or Uncle Frank might live to see 120. (9)

Shoring Up with Supplements

All of us can take a giant leap toward longevity just by taking supplements. Supplementation not only protects against deficiency but also bridges the gap between average nutrition, which culminates in premature death, and optimum nutrition, which extends life span by decades. The extra nutrients that supplements provide prevent marauding free radicals from harming healthy cells, speed the repair and regeneration of damaged cells, and facilitate Renewal. The upshot of all this is a longer, healthier, more vital life. (9)